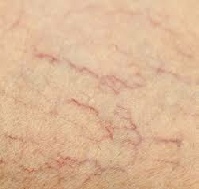 Rosacea (pronounced roh-ZAY-sha) is a common but poorly understood disorder of the facial skin that is estimated to affect well over 16 million Americans -- and most of them don't know it. In fact, while rosacea is becoming increasingly widespread as the populous baby boom generation enters the most susceptible ages, a National Rosacea Society survey found that 95 percent of rosacea patients had known little or nothing about its signs and symptoms prior to their diagnosis.

Because of its red-faced, acne-like effects on personal appearance, however, it can cause significant psychological, social and occupational problems if left untreated.

In other surveys by the NRS, more than 90 percent of rosacea patients said their condition had lowered their self-confidence and self-esteem, and 41 percent reported that it had caused them to avoid public contact or cancel social engagements. Among rosacea patients with severe symptoms, 88 percent said the disorder had adversely affected their professional interactions, and 51 percent said they had even missed work because of their condition.

While the cause of rosacea is unknown and there is no cure, today medical help is available that can control the signs and symptoms of this potentially life-disruptive disorder. Any one of the following warning signs is a signal to see a dermatologist or other knowledgeable physician for diagnosis and appropriate treatment before the signs and symptoms become increasingly severe:

Rosacea affects women to a greater extent then men however, affected men tend to have more severs forms that left untreated can cause facial disfigurement.

Several treatment options are available to treat Rosacea, Unfortunately there is no cure but by adhering to a regemin of skin cleansing, exfoliation, topical antibiotics and laser therapy control is possible.

Currently I use a dual laser combination with the Excel V laser for vascular and pigmented areas. Starting with a long pulse KTP laser ( similar the a pulse dye) to decrease the redness and vascularity  ( blood vessels) in the area then a series of Laser Genesis to clear up the background redness.

Rosacea Before and After 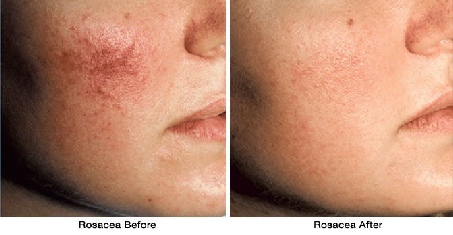